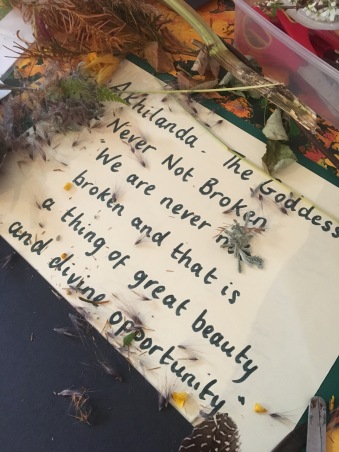 It has just been Mental Health Awareness week and I have seen lately a lot of discussion flying around particularly on Twitter to do with mental toughness and mental resilience, largely fuelled by Piers Morgan and his incessant need to self promote by being deliberately controversial about things he doesn’t really care about. Sometimes I agree with him, sometimes I don’t, on this current issue,  I do see where he is coming from in suggesting that mental resilience should be taught in schools, and I do believe teaching any positive life skill to children can only be a good thing, however it could also reinforce the stereotype that if you are struggling with mental illness then that means you must be weak, that you must be a little bit less than, and as we all know, or should do, that is simply not the case.

I am an extremely strong-minded independent person.  I moved away from my home town and all of my family in my early 20’s and had ups and downs like anyone else but I always dusted myself off , rode out whatever storm came my way and just got on with it.

I have moved house more times that I can count, I always joke and say I have lived in every county surrounding the M25, and its pretty much true!.  I have faced redundancy three times, been in jobs I have hated, had my heartbroken, felt loneliness, dealt with dodgy landlords, had surgery, written my car off, had my drink spiked…. and that was all in the space of 6 months (joke),  in all seriousness, I’ve gone through some stuff and I have always just picked myself up largely without involving anyone else.

Sometimes I have made a call to my parents to let them know what was going on. It would be usually after the drama had subsided, and the call would start with ‘I’m ok now so there is nothing to worry about but…’. Sort the problem, then tell my parents, that was my preferred MO. During each of the low periods, I always had hope, I always knew that just around the corner there was something else amazing, whatever I was going through may have felt dreadful at the time but something fabulous would be coming, nothing ever felt like the end of the world, and if it ever started to, I would take myself off to my favourite restaurant, lose myself in London for the day, chat to the odd person who was probably doing exactly the same thing as me, or chat to no one and lose myself in a book, shake off those mean reds and come home feeling excited again.

It never occurred to me that I would ever feel differently, or react any differently, but then it never occurred to me that I would ever become involved with someone who could be capable of unleashing such destruction on my life and mental wellbeing that it would lead me to a position where I would come close to ending my own life. That I would feel so broken and beyond repair that I would lose all sense of hope and belief that there was anything around the corner worth fighting for, that I would find myself in a position that on some days I would be so debilitated with misery and hopelessness that I wouldn’t be able to get out of bed.  But here I am,  and here I have been for longer than feels comfortable.

So don’t talk to me about being mentally tough and having mental resilience. If we are to go with the theory that tough, strong-minded and emotionally resilient people are immune to mental illness, then I was the poster girl for that.

In fact in hindsight, I do believe that my strength and independence had a lot to do with me not seeking help earlier than I did. I refused to accept the gravity of the situation, I ignored the signs and didn’t see myself getting ill. I had come through adversity before without any help from anyone, so I would do it again. But this time wasn’t like all the other times, this time it was different , dangerously different and I wasn’t going to be able to do it alone.

I changed as a person, not overnight but gradually, it was the slow realisation that getting back to my independent self was going to take a long long time, and the magnitude of it all gradually weakened me, having to rely on my family was slowly chipping away at my pride and self-esteem, struggling to get another job, living in an area that was now alien to me, having to explain to people over and over why I was living back in my hometown, I felt like an animal in a zoo that had been snatched from the privacy of my natural habitat and now I was having to act out on stage in front of everyone,  and all of these contributors eventually stripped me of my mental resilience and toughness, like the animal in the zoo, my spirit was slowly being broken.

So, whilst I do think it is important to instil a certain degree of mental resilience in our children, it isn’t a cast iron guarantee that none of  them will suffer from mental health problems in the future, and THAT suggestion, is what I find extremely careless and very irresponsible.

We need to move away from this constant stigma that mental health issues only affect a certain type of person and with the right mindset they can be avoided altogether, that you can ‘prepare’ your mind to be strong enough to face anything that comes your way, because it simply isn’t the case, mental health issues can affect anyone and everyone at anytime. I am not here 20 months down the line and 6 months into being diagnosed with Depression because I don’t have the right mindset or I am not strong enough, or because I am wallowing in self-pity. I fight everyday to the point of exhaustion trying to think of ways to turn my situation around, so to hear people who don’t have a mental health problem suggest that they can be avoided by having the right mindset, makes my blood boil to say the least, it is an extremely ignorant and uninformed viewpoint.

We are all individuals and there is no one size fits all approach for most things let alone mental health. I already see in my nieces and nephews how different their personalities are and how differently they respond. For instance, raising a voice to one of them will immediately bring on floods of tears and embarrassment and cause them a great deal of distress, whereas raising a voice to another hardly has any effect. So immediately we have a situation where those two children are going to respond completely differently to a situation.

I know that when I was at my lowest last year and I was still trying to engage in an exercise class, no amount of shouting, motivating, encouragement, whatever you want to call it could get me to move any faster , it just made me feel worse, sometimes I would just cry all the way home in the car. I wasn’t in a place to receive it or my body to respond to it and this is one of the main reasons I changed up my regime to a gentler form of exercise, because what used to motivate me, now just upset me and made me feel worse. I already wasn’t the same person, and what had previously worked for me was no longer working.

So imagine setting a child off into the world who has the mindset that nothing can touch them, that they have the skills and mindset to be able to fight against everything that comes their way,  and they get to their 40’s and all of a sudden they come across a situation that they can’t manage, despite being taught that they have been given all the tools to enable them to?. It will be like that feeling of asking a question three times and still not understanding the answer, do you ask again?, no, you struggle along in silence because you feel like you should have understood it by now and struggling in silence is exactly what we DONT want people with a mental illness to be doing.

I don’t have the answers to this and nor do I know enough about working with children to suggest a way of addressing this issue in school, but surely the way forward is to teach children that all feelings are valid, even the not so nice ones, teaching open and honest communication, sensible thought processes and management of emotions. It doesn’t have to be about ‘toughening up’ , this is one of the main problems particularly amongst men is this macho nonsense that they ‘should’ be able to just ‘tough it out’ and toughing it out is what can leave people feeling like the only option is to take their own life.  It is a very dangerous stigma that needs breaking down, not reinforcing!.

Lots of love as always,

2 thoughts on “Are you tough enough?”